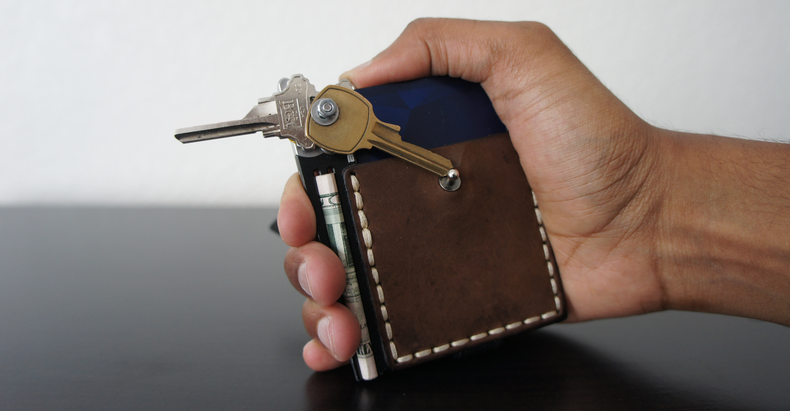 A few months ago I locked myself out for the second time in a year, and my ‘ripstop nylon’ wallet was well, ripping apart after five years. Looking at a smorgasbord of crowdfunded ‘minimalist’-themed wallets and various keychain alternatives, I stumbled upon one solution that’s worked for me and others have asked about.

The wallet I ended up switching to is called the AJ-Wallet, which stood out for having a solid aluminum frame, a foldaround ‘comb’ for holding cash, and with a trip to the hardware store a way to hold keys.

Anyways, before jumping into the key modification, let’s look into a few aspects of the wallet.

The metal billfold is a neat idea and is originally what drove me to buy the wallet, but feels like a balancing act – carry too much and the cash becomes too hard to stuff it in-between the metal ‘comb’, carry too little and cash can fall out. Ideally the comb would have some type of spring loaded aspect to it to help ‘grip’ the cash, or there could be a latch on the underside to lock it in place.

Without this, loading cash feels a bit too cumbersome, and when shopping I’ve found myself slipping cash straight into my pocket to load in later. 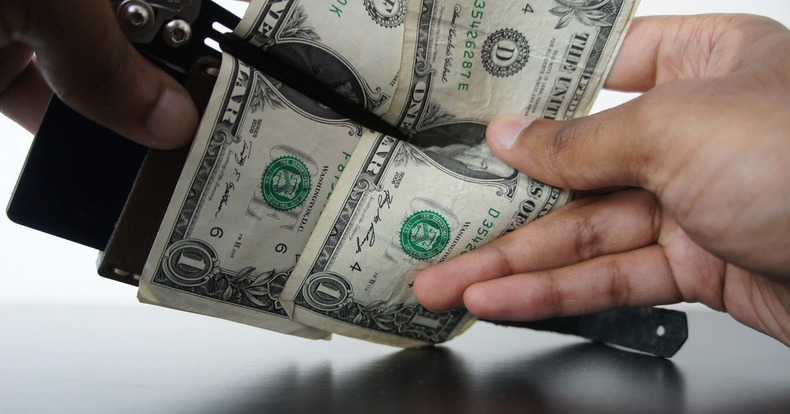 This wallet can’t hold change, but in theory one could replace side with a pouch or rubber material to hold a few coins in place. Hopefully arcade machines & laundry machines will be using [insert new-age bitcoin-ish currency here] soon.

I can’t complain much about how this holds cards. It works well enough, despite being limited to just around seven cards.

Yep, it does that too. I’ll spare you a picture since you should be getting beer from a tap.

And it can hold Keys!

This thought occurred a day after the lockout, and I immediately biked to the hardware store to try things out. To modify the wallet, you’ll need the following: 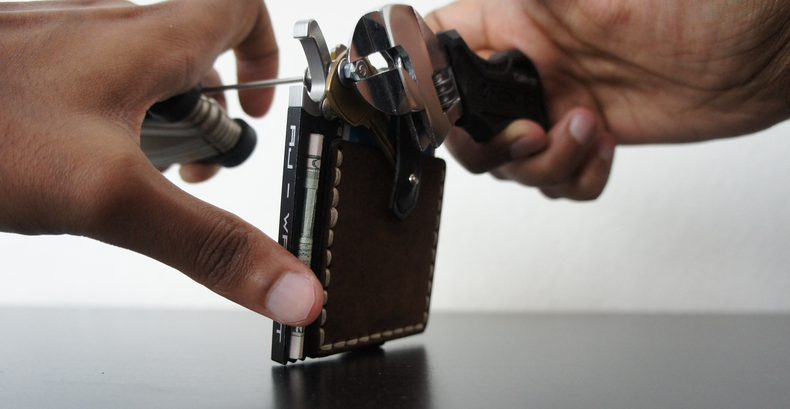 For the wrench, I used a sweet little thing called the engineer pocket wrench, and while it may seem odd to blow nearly 30 bucks on a tiny wrench, it’s managed to serve many uses for bicycle maintenance (notably a wheel spanner wrench), and for electronics work.

Also, when loading the keys, play around with different configurations. The pictures show one key on the backside, but the way I now use the wallet is with all three keys on the frontside, which has felt more ‘out-of-the-way’ when dealing with removing cash. They key shapes themselves will also influence ordering - for instance below is a key with a large square head that interferes with the other bolt on the wallet, so it has to be placed further out.

Anything that tries to combine functions and save space means tradeoffs. Beyond the earlier issues mentioned Here they are:

NOTE: I intentionally didn’t link to where to buy one now. While I’m happy with the wallet, the kickstarter comments reveal some shadiness from the maker. I’ll also note that the wallet was shipped from Malaysia and doesn’t say ‘Made in UK’ as the original campaign’s photos hinted at. This said, I’d love to see someone improve on this wallet in regards to loading cash and holding keys and launch yet-another crowdfunded wallet campaign. I’d do it myself but I’m too busy with my own projects at the moment.